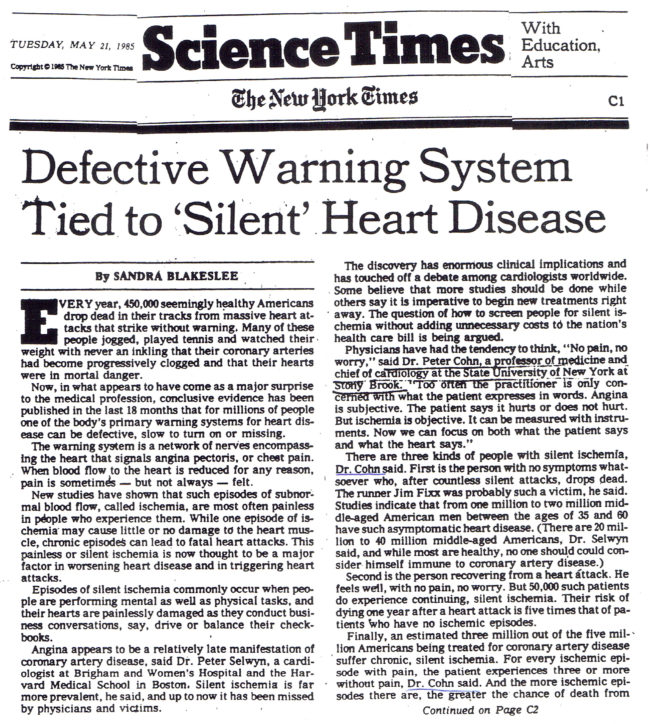 By SANDRA BLAKESLEE
EVERY year, 450,000 seemingly healthy Americans drop dead in their tracks from massive heart attacks that strike without warning. Many of these people jogged, played tennis and watched their weight with never an inkling that their coronary arteries had become progressively clogged and that their hearts were in mortal danger.

Now, in what appears to have come as a major surprise to the medical profession, conclusive evidence has been published in the last 18 months that for millions of people one of the body’s primary warning systems for heart disease can be defective, slow to turn on or missing.
The warning system is a network of nerves encompassing the heart that signals angina pectoris, or chest pain. When blood flow to the heart is reduced for any reason, pain is sometimes — but not always — felt.

New studies have shown that such episodes of subnormal blood flow, called ischemia, are most often painless in people who experience them. While one episode of ischemia may cause little or no damage to the heart muscle, chronic episodes can lead to fatal heart attacks. This painless or silent ischemia is now thought to be a major factor in worsening heart disease and in triggering heart attacks.

Episodes of silent ischemia commonly occur when people are performing mental as well as physical tasks, and their hearts are painlessly damaged as they conduct business conversations, say, drive or balance their checkbooks. Angina appears to be a relatively late manifestation of coronary artery disease, said Dr. Peter Selwyn, a cardiologist at Brigham and Women’s Hospital and the Harvard Medical School in Boston. Silent ischemia is far more prevalent, he said, and up to now, it has been missed by physicians and victims.

The discovery has enormous clinical implications and has touched off a debate among cardiologists worldwide. Some believe that more studies should be done while others say it is imperative to begin new treatments right away. The question of how to screen people for silent ischemia without adding unnecessary costs to the nation’s health care bill is being argued.

Physicians have had the tendency to think, “No pain, no worry,” said Dr. Peter Cohn, a professor of medicine and chief of cardiology at the State University of New York at Stony Brook. “Too often the practitioners are only concerned with what the patient expresses in words. Angina is subjective. The patient says it hurts or does not hurt. But ischemia is objective. It can be measured with instruments. Now we can focus on both what the patient says and what the heart says.”

There are three kinds of people with silent ischemia, Dr. Cohn said. First is the person with no symptoms whatsoever who, after countless silent attacks, drops dead. The runner Jim Fixx was probably such a victim, he said. Studies indicate that from one million to two million middle-aged American men between the ages of 35 and 60 have such asymptomatic heart disease. (There are 20 million to 40 million middle-aged Americans, Dr. Selwyn said, and while most are healthy, no one should consider himself immune to coronary artery disease.)

Second is the person recovering from a heart attack. He feels well, with no pain, no worry. But 50,000 such patients do experience continuing, silent ischemia. Their risk of dying one year after a heart attack is five times that of patients who have no ischemic episodes.

Finally, an estimated three million out of the five million Americans being treated for coronary artery disease suffer chronic, silent ischemia. For every ischemic episode with pain, the patient experiences three or more without pain, Dr. Cohn said. And the more ischemic episodes there are, the greater the chance of death from… continued on page 2

The role of ischemia in heart disease is undergoing major theoretical revisions according to Dr. William Shell, an associate professor of medicine at the University of California at Los Angeles and an associate cardiologist at Cedars-Sinai Medical Center.

The classic variety is demand ischemia. When a patient is exercised on a treadmill, his heart demands more oxygen-carrying blood. If his arteries are obstructed with a waxy substance called plaque, an imbalance or ischemia occurs. The heart cannot get enough oxygen, and the patient may experience exertion angina or silent ischemia. A second variety is supply ischemia.

The heart beats at a normal rate but suffers an imbalance when the supply of blood is somehow reduced. This is thought to happen when blood platelets intermittently collect on the plaque. The platelets release a substance that causes the artery to constrict nearby. The result is ischemia, with or without pain.

A third type, Dr. Shell said, can be promoted when the central nervous system releases substances involved with the routine mental activity. The blood vessels tend to constrict when the patient merely talks and thinks. Another idea is that noxious substances such as caffeine and cigarettes, or even blasts of cold can also cause the blood vessels to constrict -abnormally, resulting in ischemia.

All these factors probably operate together, Dr. Shell said. But they only hurt people whose arteries are first damaged and obstructed by the buildup of plaque, or arteriosclerosis.

A common way to diagnose suspected heart disease involves placing people with high-risk factors — a family history of heart disease, obesity, high blood pressure, smoking habits and so on — on an exercise treadmill. An electrocardiograph picks up signals from the heart and records them in predictable patterns on a tape. Ischemic episodes appear as distinct lines on the tape. Healthy people do not register the telltale ischemic patterns.

Recently, however, some physicians began to monitor their heart patients with portable electrocardiographs worn 24 hours a day.

The findings were startling. In one of the most thorough such studies, 30 angina patients at Hammersmith Hospital in London were continuously monitored for 18 months. As a group, they experienced 1,934 episodes of ischemia. Less than a quarter of the episodes, when correlated to patient diaries, were accompanied by chest pain. The majority were silent, severe and lasted, on average, 20 minutes. Some went on for up to 80 minutes. Angina, on the other hand, usually lasts from one to five minutes.

Furthermore, according to Dr. John Deanfield, one of the British investigators. Ischemic episodes peaked in the morning and tapered off during the day. As the patients slept, read newspapers and talked on the telephone they had their silent ischemia attacks.

To assure that the instruments were picking up true ischemia and not some artifact, the patients were simultaneously monitored in the laboratory with a direct imaging method. It showed reduced blood flow to the heart in concert with ischemic readings from the portable electrocardiograph.
A few patients were hooked to the portable devices while suffering heart attacks. In most instances, the attack was preceded by increasing levels of silent ischemia.

One of the most puzzling findings is that silent ischemia is more frequently associated with levels of mental arousal than any other activity. When subjects were asked to subtract sevens from 100 as fast as possible, for example, their silent ischemia increased. Most ischemias were associated with professional activities such as reading and meeting business associates and friends.

Other studies support these findings. The first reported 10 years ago by Dr. Carl Pepine of the University of Florida at Gainesville, found three out of four monitored ischemias were silent. Back then, he said, the idea was “difficult to grasp.” Recent trials at U.C.L.A. found three in four ischemic episodes were silent in people with stable angina and nine in ten attacks were silent in patients with a variant called unstable angina.

Other studies confirm that for many people the first awareness of heart disease is a heart attack. Some even experience silent heart attacks. That is, their hearts are severely damaged and scarred yet they swear they did not feel it happen.

No one knows why some ischemia is painful and some are silent, Dr. Cohn said. But there are theories. One holds that there is something wrong with the person’s basic cardiac pain mechanism. The ischemia is not being translated into “I have chest pains, doctor.”

Studies have tried to look at this, he said, but are inconclusive. Some heart patients seem to have higher pain thresholds than others but the differences are not dramatic. New methods of clearing clogged arteries with tiny balloons on the end of a catheter may shed light on pain perception in arteries.

A second theory holds that different amounts of heart tissue are affected by each episode of ischemia. There is some evidence to support this, Dr. Cohn said, but the overlap is considerable. An amount of damage that causes severe pain in one person does not bother another person.

A third possibility is that silent ischemia may be perfectly normal.”Internal organs are not so well tuned to sensory perception,” Dr. Selwyn said. “When the heart registers pain and what determines the onset of angina is not well-known.”

Who should be tested for silent ischemia? “We cannot afford to have everyone take a stress test,” said Dr. Cohn, referring to the treadmill test. About 5 percent of middle-aged men have high-risk factors and they are the primary candidates for routine screening.

Nevertheless, a positive stress test does not prove the existence of heart disease. Other tests, some more invasive than others, need to be done to confirm the diagnosis. The process is expensive.

There are several ways to treat patients with confirmed silent ischemia, Dr. Shell said. Drugs include nitroglycerin worn on a skin patch so that the medicine is continuously absorbed: beta blockers; calcium channel blockers, and a drug that suppresses hormones involved with blood’ dynamics.

Surgical treatments include balloon catheterization and a coronary bypass operation in which detours are built around blocked arteries.

But all the experts say that the relation between silent ischemia and the medical prognosis is not yet clear. If drugs are given to eliminate or reduce episodes of silent ischemia, will the patient be healthier? Are side effects worth the benefits? Is it important to eliminate all ischemia?

Silence is not mildness, Dr. Selwyn said. The answers to such questions are not yet determined, but it is likely that doctors will no longer be content to just relieve chest pain in their heart patients.